Igeu Kabesa is the Top Featherweight Prospect Africa has right now. Igeu besides being one of the top African Prospects is one of the top Featherweights in the world!! Igeu Kabesa without a doubt will be in the UFC, Bellator, One Championship or Professional Fighters League. Igeu is something special, The next future CHAMPION to come out of Africa!!

“My biggest test I would say was Peter Queally. He was bigger and I think his training with Conor makes his game hard. But I love hard fights.” Igeu Kabesa 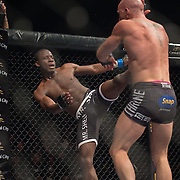 The Congo’s Igeu Kabesa (12-1) defended his EFC featherweight title for the sixth time at EFC 79 last night against Croatia’s Karlo Caput (8-1),Croatia’s Caput entered the bout with an impressive undefeated 8-0 record, and a sensational five second knock out at his last outing. The featherweight champion Kabesa, with only one defeat in his career, was confident throughout the build up to the bout, and backed his word inside the fight.

Kaput began by pressuring the champion with punches.Kabesa circled, and at just over the one minute mark, connected with acalculated overhand right that crumpled Kaput to the canvas. https://www.google.com/amp/s/www.thefightchamber.com/mma/efc-79-kabesa-demolishes-caput/amp

Give it a couple more fights and Igeu Kabesa will be getting a call from Dana White, Telling Igeu your going to fight in the Dana White Contender Series. Maybe Scott Coker calls Igeu telling him he wants to sign him!! Igeu has so many options as he’ll have a bright future ahead of him, in the future Main Eventing an event in South Africa for UFC or Bellator.

Overall check Kabesa out on YOUTUBE because he’s going to be something special I truly believe that!! Future UFC or Bellator Featherweight Champion!!