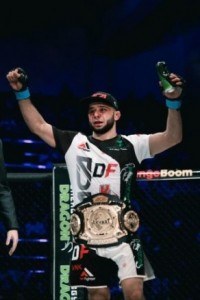 Rustam Kerimov MOST Successful Russian Bantamweight prospect, ACA Bantamweight Champion is the next UFC, Bellator or One Championship title holder from DagFighter. Following the footsteps of Khabib Nurmagomedov.

Kerimov comes from the Russian tradition of Combat Sambo as he’s a world class grappler with underrated kicking game. Aggressive, Push the pace type of fighter. Not gonna see knockouts but more dominant three or five round victories.

Watch his fight against Dudaev and that’s the best version of Rustam Kerimov that you’ll see. Rustam Kerimov is a pitbull and a world class fighter. Makes sense why’s he a top 50 Bantamweight in the world.

Kerimov in 2020, 2021 signs with UFC, Bellator or One Championship facing the best Bantamweights in the world. Bantamweight Champion in the making!!